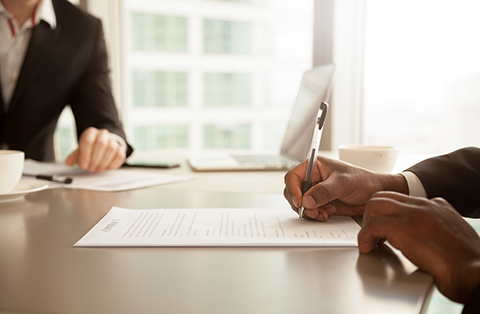 Summary: Invalid written agreement of sale of immovable property – respondent signing agreement on behalf of a trust without necessary authority – seller abandoning claim for specific performance against the trust but seeking to hold respondent liable for payment of the purchase price, tendering to transfer the immovable property to him – claim dismissed.

Appeal from the Gauteng Local Division of the High Court, Johannesburg

Facts: On 24 January 2013, the Seller,  cited as the Appellant here, and an entity described as the Des Property Trust being the Purchaser, represented at the time by the Mr Dene Capper, signed a written agreement of sale in which the trust purported to purchase a real right of extension reserved in terms of s 25(1) of the Sectional Titles Act 95 of 1986 (the Act) in a sectional title scheme, against payment of R1.45 million. The agreement failed to make provisions in terms of the Alienation of Land Act 68 of 1981, and that it was therefore void ab initio.

The appellant subsequently instituted action against the trust represented by both its trustees, Mr Capper and his co-trustee, iProtect Trustees (Pty) Ltd, seeking, payment of the purchase price and sued Mr Capper in his personal capacity. The Appellant conceded in the court a quo that the Deed of Sale did not comply with the Act was therefore unenforceable, thus the claim against the trustees was abandoned. However it continued against Mr Dene Capper in his personal capacity. The court a quo dismissed this but granted an appeal.

It is common cause that Mr Capper signed in his representative capacity as “trustee,” that the agreement of sale makes provision for individuals signing in their representative capacity. It came out that Mr Capper was not duly authorised, that in fact had breached the warranty given to be acting on behalf of the Trust. Meaning that he was liable. The court rejected this and stated that the agreement was void and that the Trustee was not authorised. That the argument made by the Appellant is that Mr Capper had acted in a fraudulent manner and had induced the Appellant to sell. This claimed based upon the so called man on the street test, but the court rejected this and stated that one cannot import tacti terms in to a contract for the benefit of the Appellant and that there can be no legal authority to sign for a Trust to be formed.

The Court was satisfied that “in theory” that the Mr Capper could be held liable to the Appellant for damages flowing from his breach of warranty per the case of Claude Neon Lights (SA) Ltd v Daniel 1976 (4) SA 403 (A) at 408E-409F. But this was never fully pleaded and not claim for damages was formulated as such in the Appellants prayers.

That further as observed in Katzenellenbogen Ltd v Mullin 1977 (4) SA 855 (A) where a contract of purchase and sale of a marketable commodity is breached by non-performance, the extent of the innocent party’s loss is generally established in terms of the following formula:

This was not attended to in the present case. The Court held that the court a quo correctly dismissed the appeal.

On appeal from: Gauteng Division of the High Court, Pretoria

Facts: Mr Botha being married out of community of property, entered into a mortgage agreement with Standard Bank late 2008. He was principal debtor with his wife being a surety.

In November 2011 Mr Botha’s estate was finally sequestrated and trustees appointed to administer it. The bank sought to recover the full outstanding balance and proved its claim in an amount of some R 2,3 million. The principal debt having become due meant that the surety’s debt, also became due and that prescription started to run against the debt in terms of section 12(1) of the Prescription Act 68 of 1969 (the Act). Which section states the following:

“…prescription will run as soon as a debt is due. A debt is due once the creditor can identify the debtor and the facts from which the debt arises or until the creditor becomes aware of the existence of the debt.”

But, since the principal debt related to the bank’s claim in insolvent estate only, constituting an interruption to the flow of prescription in terms of section 13(1)(g) of the Act. This section states the following

“…if a debt is the object of a claim filed against a company in liquidation, the relevant period of prescription would be completed before or on, or within one year after, the date on which the relevant impediment has ceased to exist. An impediment contemplated here ceases to exist when the filed claim is rejected or, if it is accepted, when the final liquidation and distribution account is confirmed by the Master.”

This interruption ceased when the Master approved the final account of the insolvents estate, and, prescription then began running again.

The property was sold in 2012 the bonds cancelled. The bank having only received part of its claim instituted a claim against the surety for the balance. Mrs Botha defended the matter and claimed that it had in fact prescribed in terms of section 11(d) of the Act. The argument was that once the bonds were cancelled the debt was no longer secured and thus was not enforceable. The bank maintained that the cancellation of the bonds did not render the debt unenforceable debt, since it remained a debt secured by a mortgage bond as contemplated in section 11(a)(i).

The Court a quo upheld the bank’s contention, but granted Mrs Botha leave to appeal to this Court

Appeal: Our courts have determined that the prescription period applicable to a debt secured by a mortgage bond is fixed at the date on which the debt becomes due and does not alter its character merely because the bond is subsequently cancelled.

Yet in Investec Bank v Erf 436 Elandspoort (Pty) Limited & others the weight of academic authority suggested that if the bond is cancelled prior to being settled and the security ceases to exist, the debt is no longer secured, and the prescription period is then three years. The Court held that a loss of security could have a bearing on the prescription period.

Thus read, the Act requires a debt to be classified as a debt secured by a bond when it is due not when the bond is registered because that is when prescription begins to run.