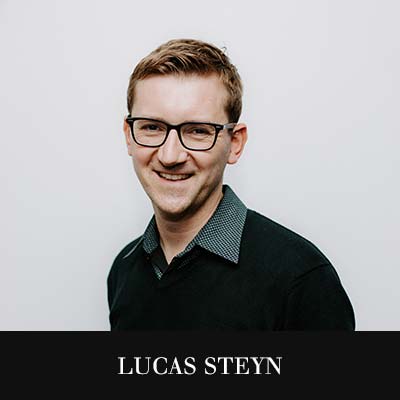 Lucas obtained his LLB degree at the North West University (Potchefstroom Campus) in 2007, whereafter he completed his first year’s article with a well-known conveyancing firm based in the West Rand. In 2009, he obtained further exposure in his final year of articles with a boutique firm focusing on Civil law, Family Law, Conveyancing and 3rd party Road Accident Fund Claims. In 2010, Lucas was admitted as an Attorney and in 2017 he was duly admitted respectively as a Notary and Conveyancer.

During 2014 he joined a Conveyancing firm based in Randburg, specializing in Property Law with specific focus on Property Development and Registrations of Sectional Title Developments.

In 2017 Lucas joined forces with Armand Senekal and founded Senekal Steyn Incorporated where he spearheaded the conveyancing department until the beginning of 2021 when he relocated and joined ESI.

Lucas is entrepreneurial minded with a passion for the property sphere.  In addition, he also has experience in product development, imports and town planning. Lucas’ philosophy is to add value to his clients in an innovative and creative way. Lucas loves spending time outdoors and is especially fond of hiking and sailing.